The “Mañana Means Heaven Blog Tour” kicks off this Monday with a great interview by Kerouac scholar and author, Stephanie Nikolopoulos. Starting Monday, six different blog sights (see links below) will be posting interviews, excerpts, never before seen photos of Bea Franco, audio clips and other cool tidbits about the book over six days. This is an opportunity to learn more about Bea Franco, and get access to material that was not included in the book.

FYI, the east coast leg of the book tour begins as of next Wednesday, September 18 in Easthampton, Mass. After that I go to NY for the book release party at La Casa Azul Bookstore, and then on to the Brooklyn Book Festival. Please click here for all dates and details. Thanks again for supporting and I hope to see you at these events! 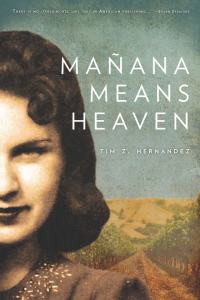 Last Friday I received a phone call from Albert Franco (Bea’s son) telling me of the dismal news that his mother had passed away last Thursday morning. This comes exactly one week after she held a new copy of “Manana Means Heaven” in her warm hands, and allowed her daughter Patricia to snap some photos of her. One of which I posted on my Facebook account (see below). Needless to say, I was stunned at the news. We had been making plans to honor her at the upcoming book release event in Fresno, and she had been doing great health-wise in recent weeks. Over the weekend I pulled out the video footage of our interviews, which were done in late 2010, when I first found her, and I watched them. She still had her humor about her, and her warm smile was infectious. Especially as she told me the story of how in the early days of East Los Angeles, she wasn’t afraid to fight, and how she often defended her sister Angie from bullies. She laughed about those days. Bea also loved skittles. She often kept a bowl of them on her dining room table. Throughout our interviews she would sneak away to the back of the house to take a few puffs from a cigarette. She was 90 years old at the time. When I first told her that there were over twenty Kerouac biographies that had included her name, her reply was, “Why? My life wasn’t so special.” And then she’d chuckle. In viewing those videos, I see now just how lucky I am to have known her, even if only for a brief moment in time. During the years it took me to write “Manana Means Heaven,” as any writer will tell you, I lived with her in my mind and heart. And then sometimes I’d speak with her in person and she’d remind me, in her own unassuming way, that it was simply a small part of who she was, in a life that spanned nearly a century. On this melancholy occasion, I think of the curious way she signed off her letters, to Kerouac, to her husband and to her friends: “I REMAIN AS EVER, Bea”

This is a letter that will likely never get sent. I decided to write to you each time I sit down to work on the book. Like tossing questions at the universe with hopes that just somehow it might answer back. Today I went into the Fresno County Hall of Records and told them I was looking for my great Grandmother’s marriage or death certificate. Either will do, I said casually. I had to wait in this long line for over an 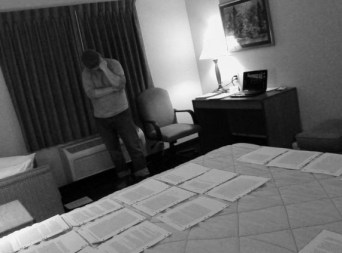 hour. The whole time feeling like an imposter. I mean here were people really going for something, a lost bit of something dire, and here I was, on a self-appointed mission. I started thinking I might be going too far with all this. Felt like I was playing some masquerade, only fooling myself. The clerk called me forward and after filling out some papers she had me follow her to a back room. “These are all the old files, anything before 1950 would be here,” she said. She pulled out a book the size of a Cadillac and opened it to the index and began looking for your name. After thirty minutes we agreed it wasn’t there. Probably a good thing, I figured. If we had found something, before releasing the info to me I would’ve had to brandish proof I am related to you. This is what the woman said to me. But then again, if the goods were there I’m sure I would’ve made it happen one way or the other. Last week I was at the Genealogy Department at the Fresno Library. I poked around for a couple of hours, scrutinizing all the Francos listed but none of them had the right details. As I began walking away the woman helping me asked, “Are you sure she isn’t still alive?” I chuckled. “What farmworker do you know lives to the age of 90?” I said.

I’ve been following leads now for over a year, hoping to find your truth, not his or theirs. I finally decided to hire an investigator. A Serbian woman named Adreann, majored in English back in her college days. Told her you were likely dead, but that we should look for Albert or Patsy, who I figure are probably around 70 years old by now. She was impressed by my legwork. Gave me some advice, tips on how to get information. Before we parted ways she added, “In all my years of experience, dead people are easy to find…living people are hard.” This stuck with me days after. This is why I ended up at the County Records office today, armed with the nerve to claim I was your great grandson. There’s so much I want to ask you Bea, far more questions than answers, things I need to know in order for your story to be told as accurately as possible. One letter can’t possibly cover it all, so I’ll continue to write to you. Even if it’s a lost cause and there’s nowhere to send it. That’s all for now. I hope wherever you are, you’re laughing.